The castle and the many church steeples. The mirror of a river where houses and gardens are reflected. The “scissor” roof triangles. The horizons of beach and sea. Charms of Tavira, city of art and history, a must-see on the Algarve’s cultural itinerary. 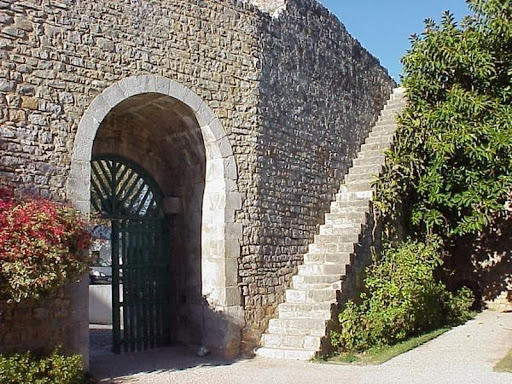 It integrated, with the walls that surrounded the city, that part of the walls still remain between the houses and the door of Misericórdia, the defensive system of the city. The original Moorish fortification was rebuilt by King D. Dinis (1261-1325). From the top of the towers there is a wide view of Tavira and the surrounding landscape, covering the sea.

CHURCH OF SANTA MARIA DO CASTELO

Probably built on the site of the old mosque. Century building. XIII with subsequent alterations, partly caused by the 1755 earthquake. Gothic portal, with capitals of vegetal ornamentation. Outside, there are other Gothic elements: warhead window and small rose window, dogs and gargoyles on the headboard. The Clock Tower also belongs to the primitive construction, although with later decorative additions. Interior of three naves, with vaults. On the left wall of the chancel, the tomb of the seven knights of the Order of Sant’Iago killed by the Moors in an ambush, the reason for the conquest of the city. On the platform, an image of great beauty of Our Lady (18th century).

Deservedly considered the best Renaissance building (16th century) in the Algarve. The portal of great beauty is surmounted by the image of Nossa Senhora da Misericórdia, under a canopy of which two angels hold the curtains. Laterally, the shields of Portugal and Tavira and two loudspeakers representing São Pedro and São Paulo. Interior of three naves, with capitals in the Renaissance style decorated with frowns. In the chancel, a spectacular gilded altarpiece and images of Nossa Senhora da Visitação and Santa Isabel (18th century). On one of the side altars, a beautiful carved altarpiece involves a circular painting of Nossa Senhora da Conceição (18th century). From the same period, the historic tiles that line the walls, duly captioned, representing the Works of Mercy. In the sacristy is an image of the Crucified Lord, possibly from the century. XVI. Annex, a small cloister.

Built, according to tradition, on the site of the smaller mosque. With origin in the century. XVIII, underwent successive modifications. With a sober architectural style, it keeps, however, a valuable set of images and paintings, some from extinct convents. Among the images worthy of mention are the Nossa Senhora da Conceição (18th century), in the chancel, Nossa Senhora a Franca (possibly from the 16th century) and the Sagrada Familia (18th century), in side chapels. , an interesting image of Our Lady (15th century?) and others from the 15th century. XVII and XVIII.

Built at the beginning of the century. XVII, belonged to an old convent. Facade with galilee. In a niche, the image of Nossa Senhora da Ajuda (17th century). Interior of a single nave. Carved altarpiece of the main altar (17th / 18th centuries), with the image of Nossa Senhora da Ajuda (18th century). The side altars of Nossa Senhora do Carmo and Rosário and the two side altars of Almas also have carved altarpieces from the 19th century. XVIII, without gold. In the collateral altarpiece of the Gospel, a polychrome bas-relief of the Lord’s Supper (17th century). The church has a good nucleus of images from the centuries. XVII and XVIII, with a highlight of the transept of Our Lady of Flemish origin (15th century). The transept floor is unique in Portugal: red tiles with painted figures, of Spanish origin (17th century). Still in the main altarpiece, two boards from the 19th century. XVI, representing the adoration of the Child Jesus, and images from the centuries. XVII and XVIII.

Medieval in origin and integrated in a convent, it underwent a profound transformation in the 19th century. XIX due to a collapse and a fire. From the primitive Gothic temple, only the sacristy remains, with a large window and vault, and two chapels in the old cloister. Baroque bell tower (18th century) with great decorative effect.
The church is remarkable, in addition to the images of the century. XVIII and four large canvases by an Algarve painter from the same time, an image of Santa Ana offering a fruit to the Child sitting on the lap of the Virgin, possibly from the 19th century. XV.
The baroque gilded carving of the altarpiece and the twelve niches of the sanctuary – now a side chapel – were part of the primitive temple. At the Casa da Irmandade (former convent gatehouse), an ashlar tile pattern from the 19th century. XVII.

Church of SÃO JOSÉ DO HOSPITAL

It belonged to a small convent, of which the cloister still remains (17th century). The set of figures, in almost natural size, describing steps in the life of the Saint, from the century. XVII, is its main artistic value.

Built in the second half of the century. XVIII. Important gilded altarpiece in the chancel that, together with the side altarpieces, the paintings, images, the chair, the organ and the sacred treasure, is a valuable example of Baroque art in the Algarve.

Of interesting architectural style due to the cubic shape of the chancel, covered by a semi-spherical cap, and the body of the longest and lowest temple (18th century).
Paintings in “trompe l’oeil”, which line the walls, and canvases that tell the life of Jesus, Nossa Senhora and São Sebastião (18th century) led to its adaptation to the Painting Museum. Also interesting, the carving and the images (18th century). In the sacristy, ashlar tiles from the 19th century. XVII.

Polychrome tiles of the century. XVII, the altarpiece of the main altar with paintings (17th century) and a harmonious image of the patron saint constitute the heritage of this simple exterior chapel.

Existing in the century. XVI, was rebuilt in the century. XVIII. The carving of the altars, the images, the panel representing Christ after the descent from the Cross (17th century) and the holy water font, supported by a gothic torsion column, form an artistically valuable ensemble.

CHAPEL OF NOSSA SENHORA DO LIVRAMENTO

Facade covered with blue tiles of the century. XVIII.
The interior contains a small treasure trove of Baroque decoration (18th century) in the gilded carving of the capelamor, the triumphal arch and the side chapels. Images from the same period.

It belonged to Compromisso Marítimo, a mutualist association of sailors and fishermen. It originates in a 19th century building. XVI.
Trapezoidal plant. Gilded altarpiece, paintings of the ceiling and altar panels and images of the century. XVIII.
They belong, however, to the century. XVII the small and elegant image of Nossa Senhora das Ondas and the tiles of the sacristy.
On a side wall there are the weapons of King D. Manuel and the marquis of Vila Real and counts of Alcoutim (16th century).

LAGAR - MUSEUM (HOUSE OF THE ARTS)

Former residence of the agricultural owner, with facade of balcony balconies facing the river.
The Lagar-Museu allows you to appreciate the ancient technology of extracting olive oil from the olives harvested in the fields surrounding Tavira. It includes an exhibition room and an engraving workshop.

STRONGHOLD OF THE RAT

Built in the century. XVI near the mouth of the river Gilão, defense of the port entrance. It was remodeled during the Restoration War (1640-1668).

Its rural origin is manifested in its simple architecture, in the stonework underlined in color, in the oculus that tops the portal. Interior walls decorated in “trompe l’oeil”. Image of the Crucified Lord (18th century). Sepulchral stone.

Its origin probably dates back to the 19th century. XVI. The palace was remodeled in the middle of the century. XVIII.
Admire the Baroque stonework on the portal and the windows on the top floor of the most notable example of Tavira’s civil architecture.
Rehabilitated for cultural and artistic functions. Future City Museum and Center for Contemporary Art.

A trip where you can see the live image of the city projected at 360º, through a system of lenses and mirrors installed on top of the old water tank.